This last weekend was good for me. I’m back on the bike and feeling good. Friday afternoon was hard. I didn’t want to ride, I was tired. But I forced myself to keep the cranks rotating. I made it 3 hours. Not bad. Saturday was better. Today, Sunday was great. I’m back in the groove. I don’t know what happened to me, just flat out lost interest in the long rides. It’s always easy hammer out an hour or so. But 3+ hours on the bike is a bit different. And I’m not talking about 1.5 hours of riding and 1.5 hours of drinking cappuccino, talking with friends and pulling yoga moves. I’m talking about 3 hard hours. Wait a second. 3 hours is nothing! What am I talking about. Oh yeah, I’m in that end of the season funk where 3 hours seems like 10 hours. Oh well.

So, will I make it to Moab? I paid for it, so I should go. The TeddNeck hasn’t committed to race, yet. (But he should be committed! If you know what I mean.) I was fully prepared to go alone. But now I’m having second thoughts. I’m a bit concerned about a brutal race before my trip to New Zealand. I want to arrive in NZ full of energy, prepared to race and party like it was 1999. Just joking, I don’t party anymore – or any less. So, we will see if I hit the road for Moab on Thursday AM.

Well, how did I rack up 3542 feet of vertical in 22.6 miles? Easy. Some freaks (Prob-eee) would use the ABQ Trailhead signs to define a ride, i.e., Trail 401 to Trail 365 to Trail 420, blah blah blah. I use the Back of the Pack terms, the terms that have meaning. AND I MEAN ‘MEANING’ -> Check out the CRAZY info on the Meadow of the Witch,  below the ride details.

So, here is a summary of my ride:

Check out the Google Earth Image 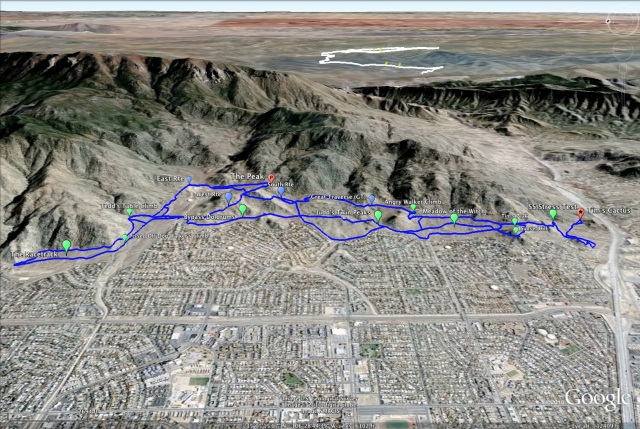 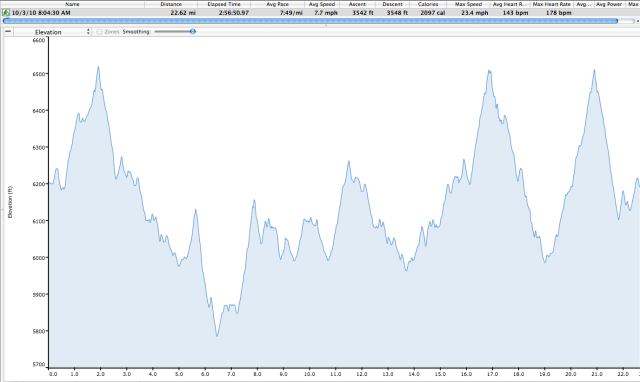 A ‘witch’ allegedly killed an acquaintance while hiking in the Albuquerque Foothills. The murder was on March 22nd, 2010. Very bizarre stuff. The CRAZY thing is that I named this very section of the South Foothills… ‘The Meadow of the Witch’. I came up with the name during the Winter 2010, months before the ‘incident’ on March 22nd. (And I had a good reason for the name, different story.) Below are links to posting / video that show I was ahead of the game. Yep, crazy S*^T happens all the time around me!

The Link – To the Crazy Blog Post EVER! – Meadow of the Witch

And if you think I am pulling ‘the wool’ over on you. Check out my blog posting on March 20th, you can clearly see that I define the ‘Meadow of the Witch’ before the murder in the ‘Meadow of the Witch’ by the ‘witch’. All the doubters could say that I rigged this. Say what you want, doubter. The B.P.R. crew knows that the trails were defined months before the murder by the witch – so… that’s that!

Yeah, I’m probably doomed now. I bet all the ‘witches’ will come out and hunt me down. Oh well – maybe they will find some compassion – because we live in a kinder, gentler nation. Don’t we? I hope so. I’d hate for some witches to take me out before I experience the possible / probable abduction via the Aliens that we all know are inhabiting our planet. (Am I joking? Jokester?)

The Link – The Proof. The Meadow of the Witch.

Oh, so you still don’t believe me? Check out this video from March 16th, I clearly define the Meadow of the Witch in this video. And I KNOW…. a 10 minute video is tedious. But it’s cool music, so enjoy it – or don’t. If you do anything – which means something other than nothing – go to the end of the video ~ the 6:50 mark. The trailer is pretty good too!

This a Trailer from Winter 2010. I don’t use it, but it cracks me up. Since winter is on the way, I think it is appropriate to bring this out of the archives.