Skip to content
Wicked, Wicked Race
24 Hours of Moab. My 1st 24 hour race, not my last. I learned a lot and will return to pursue victory, whatever that means. Brother Tedd and I cranked through 105.7 miles. (Yes, Tedd’s 1st race was a 24 ultra endurance event, awesome.) We achieved Tedd’s goal (set by ME) but not my goal. That is OK. The course was awesome, yet brutal. The 1st 6 miles included a serious amount of hike-a-bike and gnarly descents. But we survived. Tedd battled a bad brake for the entire race. I battled a unsettling creaking / cracking noise. Oh well.
Race summary:
The race started with a 1/4 mile run, yep a LeMans start. Cool. (Actually, it hurt.) Tedd and I gracefully finished the run near the end, by design. Then we cranked out about 75 miles before 1AM. My feet were killing me and I think Tedd was worn out. So we took a break. My goal of 150 miles was quickly reduced to 105 miles. OK, so… we slept / rested until 6:30AM, finally returned to the bike action at 8AM and finished the 105 miles around 12:30PM. That is the story. No crashes, no disasters, no nights in jail.
My top 10 thoughts – I mean top 13:
1) 24 hour races are awesome, just don’t get horizontal. If you do, your game plan is history.
2) Enjoy the lights, awesome watching the riders in the distance.
3) The feet get cold first.
4) Take your own hydration stuff and food stuff. This ain’t a fully stocked Colorado endurance race, its Utah.
5) You can sleep when you’re dead, or when you give up for the night.
6) If the weather sucks, it’ll suck.
7) This ain’t a weight loss event, but you will burn 8000+ calories. If you ain’t burning calories, you ain’t riding, dude.
8) Don’t try to keep up with the chicks, even if they are 100 lbs and on a single speed. (All the chicks are Pros.)
9) Hiking boots would be better than biking shoes, for the Moab course
10) 24 hours on the bike is better than 24 hours in jail, so I’m told.
11) 24 hours on the bike is harder than 24 hours of drinking beer, so I know.
12) Solo single speeders reign.
13) In the end, the quitters quit, the winners win, and Judd just wakes up to ride again.
Until next year –
check out the data & pics, dude


Judd doing what Judd does – In STYLE!

The bikes ready for action

Bike maintenance – after the wicked race 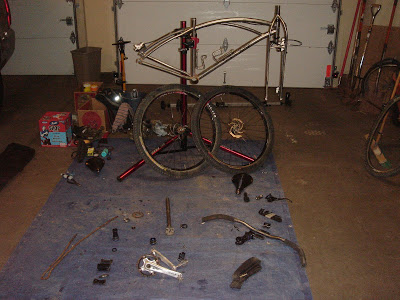 The sheep ready for action again. Note the old school ‘saddle’. Why? Because Padre defined old school during the new school of the 1940s, or should I say ‘old skool’, dude.