That is the only word required to explain the Back of the Pack performance at 12 Hours of Mesa Verde. It was a great race, but a very ugly performance by the team. I have sweet helmet cam action of Lap 1. Check back in a few days for the ‘B.P.R. Production’. It may be cool, it may suck. Who knows.

REMEMBER!
Dead Last Doesn’t Mean Loser
Unless there are no DNFs
Well, I didn’t spend much time looking at the results. But I didn’t see any ‘DNFs’ posted. Just saying.

Below is a link to the results.

Want to see a cool picture? Click on this link:

(Anyone want to buy me a poster size print for Christmas?)

So, what are the excuses? There are no excuses. We just sucked it up. But there were a few issues that added to the lame mileage.

1) My left knee is still busted up. I trashed it at the SYDC on March 27th. Then I was stupid and destroyed the already busted up knee at Dawn til Dusk. I’m on the mend. The knee is better, not perfect, but better. I simply folded. I decided to limit the damage in hopes of healing prior to the big races in June / July / August.

2) The Cinco de Mayo special – Carne Adovada Pizza almost killed me. I had serious stomach problems for 2 days. Bet you all wanted to hear that. Something to remember, avoid Carne Adovada pizza. End of Story. (I felt fine on Saturday, but Thursday and Friday sucked, felt like I had the flu. But that’s just an excuse. Even though my ‘tank’ was probably empty on Saturday. But… who cares? Right?)

3) Tedd? Well Tedd didn’t have an opportunity to ride his bike between Dawn til Dusk and 12 Hours of Mesa Verde. That’s right, Tedd didn’t turn over the cranks once. But that usually doesn’t stop him. He came down with some stomach (puke / pukage) symptoms on lap 2. I think the Carne Adovada Pizza caught up with him.

4) You, the B.P.R. fan may think I’m just ‘crying a river’. Well, maybe. But the B.P.R. crew hit the hay at 8:30PM on Friday and 9:00PM on Saturday. We barely put away any beer. We caused no trouble. We just slept. That is unusual and it proves that we were not all with it.

I don’t have many lesson’s learned or any classic stories. It was truly a race to forget.

One set of quotes does linger in my head.

Tedd: “Those rigid single speed dudes were hauling ass. Why are we going so slow?”

Tedd did have a bad experience on Lap #3. Tedd was struggling between mile 11 and mile 12. It’s a rocky section. Tedd finally convinced himself that his rigid single speed was the issue, just can’t go fast over the rough terrain. Well, Tedd looked up right when a Foxy Mama passed him, at Light Speed. The babe was riding a rigid single speed. Tedd lapsed into a deep depression – still may be in that deep depression.

Below are a few Google Earth plots and the GPS data of the race and the preride. Doesn’t mean much. Like I said above, check back when I have the helmet cam action of Lap 1. Cool stuff!

12 Hours of Mesa Verde: The Data

12 Hours of Mesa Verde: Another View 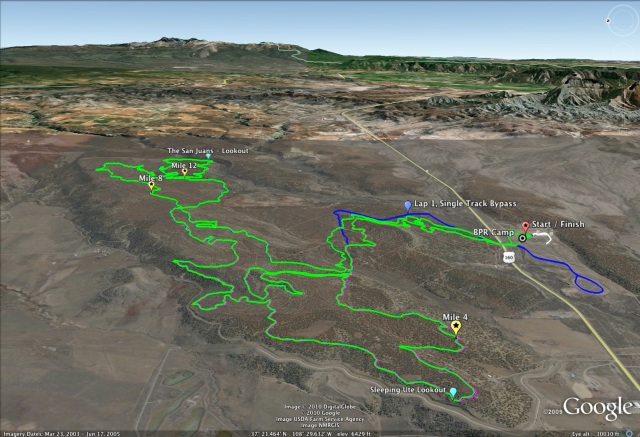 12 Hours of Mesa Verde: One Lap 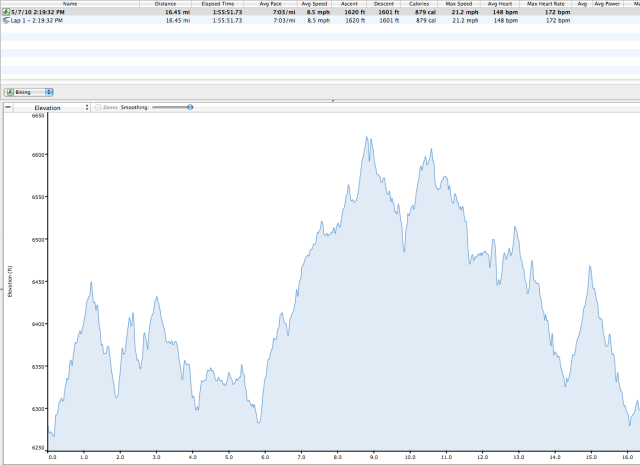