After 1900 miles in my car, all I got to say is… I need new car.
Initial thoughts on the race:
14 laps! AWESOME performance for The Judd! Right?


Well, check below for all the details: video, course map, lessons learned, pics and the standard AND bizarre comments.


The Black Sheep SnowRoller – in the snow

can you believe this! I won the raffle!
snowbike #2 will be rolling in no time

The Trip:
It was a long trip from Sandia Park New Mexico – but worth it. And I only drove about 20 miles with my eyes shut – asleep at the wheel. That’s pretty good for me.

Remember, I ride a singlespeed – it ain’t smooth, it’s rigid. And I ain’t a professional videographer. So go easy on me. And yeah, I mess with the playback speed. Because it’s fun. AND if you want a longer version of the video WITH Social Distortion – go to the end of this posting.

2012 Equinox Challenge – THE 24 Hour Snowbike Race from Judd Rohwer on Vimeo.
just some video of the 2012 Equinox Challenge – the flat stuff
The Snowbike Course:
I can confidently say this is the best 24 hour snowbike race in the country… or world. One lap is about 4 miles with 300 feet of vertical. About. We can philosofize on changes, modifications, etc. But screw it. I like it. Great track. It makes sense, especially with unpredictable weather. (BTW, philosofize IS THE correct spelling… at the back of the pack.)

Results – the hooligans operating out of room 142
The Logic that Led to Defeat :
As usual, I must analyze the events that led to my own defeat. You see, at the back of the pack, defeat is based on personal failures NOT on the official race results. I rolled in with some big goals – and I didn’t achieve my goals. Imagine that. Then again, failure fuels the fire. So, what really happened? Below are a few key points that may or may not be twisted, a bit.
Lessons Learned:


Therefore, because I have WAY TOO much time on my hands, I derived a cubic polynomial for the Judd Index of Snowbike Flotation. I normalized the index to the a 160 lbs (person + rig) and a 3.7 tire. The Judd Index of Flotation assumes that ‘flotation’ is a variable, i.e., if the snow is slush, like a slurry of ice & water, then flotation is a variable. If the snow is solid, like ice, then there is no flotation. Get it?


The basics: if you wanna get FAT – you better get skinny and have WIDE tires. Dude, Dudette. Yeah, I roll with a 260 lbs total weight, the Judd Index of Flotation is ~ 0.28 with my 3.7 Surly Nate tires. That’s tough. The Judd Index of Flotation, for Judd, with 4.7 Big Fat Larry tires is 0.52. That could work. Or… maybe I should just lose some weight. 50 lbs would work.

In the end, the moral of the story, just the way it is:
In 24 hr solo racing, if you stop… you’re done, for the most part. Unless you’re a super freak – then standard Back of the Pack logic doesn’t apply. I’ve learned this lesson many times over – I’m still learning this lesson.

32 x 20 ain’t that bad for a 24 hour snowbike race – the Equinox Challenge. 32×19 may work, under cold conditions. Ask Super Freak Jill how she likes her 36×20 – she’ll say ‘dude, it’s awesome. I’d go crazy if I had to spin a 32×20!‘ Damn, Super Freak Jill rollin’ a Pugsley (and Nates) with a  36×20 setup. I think Jill needs to follow The Lt Col’s lead and have a debate with El Freako on singlespeed ratios. (BTW, Jill + Pugsley with 3.7 Nates = the normalizer for the Judd Index of Flotation. Understand?)
The Future – will I do it in 2013?
Of course…. if The Morale Chairman or Lt Col or Mad Rhino commits to the trip. In reality, I need The Morale Chairman to drive me. Who knows? We are always up for Ludacracy. So I think it will happen.

Racing is a thing of the past? Time to adapt.
Why do we race at the back of the back? For the elusive beer sponsorship. Obviously. And that ain’t working out too well. So I’m gonna be forced to start my own brewery.  You think I’m joking.  Therefore I have some tough decisions about time allocation to bikepacking, 24 hour ‘racing’ and beer brewing. Maybe Ska Brewing will wake up and decide they need a Modus Hoperandi ambassador, that would be me.

Two Versions of Reality:
After all this rambling, you can philosofize about two possible versions of my own reality.
You know, both options could be the partial truth. Could be.
Just  a Few Pics:
the day before – the Black Sheep SnowRoller

Jill likes the drive-ups… on the snowbike

the day before – some IPA 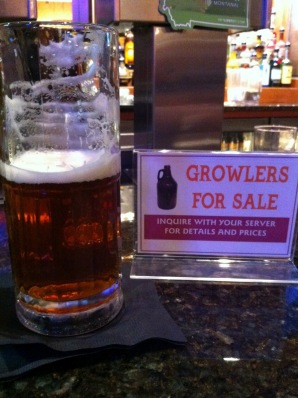 checking out the trail maps 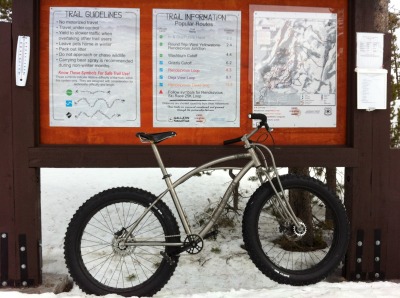 Jill likes preriding anything and everything 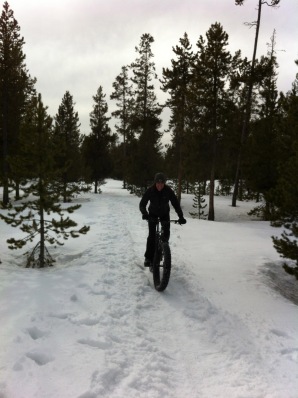 the snowbikes of the Hooligans of Room 142

when Jill and Kevin are involved in an arial photo…. well

is this a snowbike Crossfit thing? a toboggan pull? 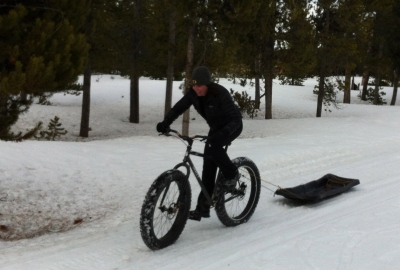 the  race site – the Equinox Challenge 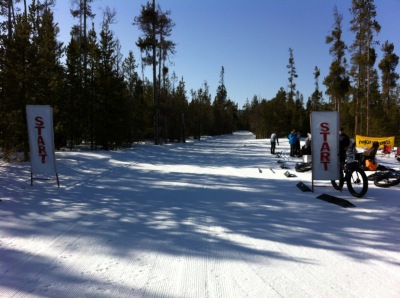 and we are off 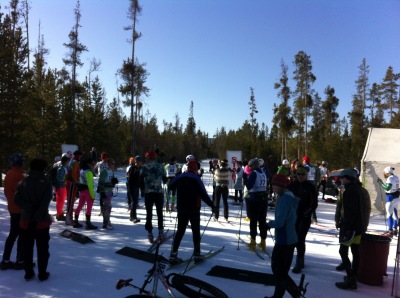 the big lunch, at the bar, without the beer, waiting for the sun to set

the big pizza – after the big race 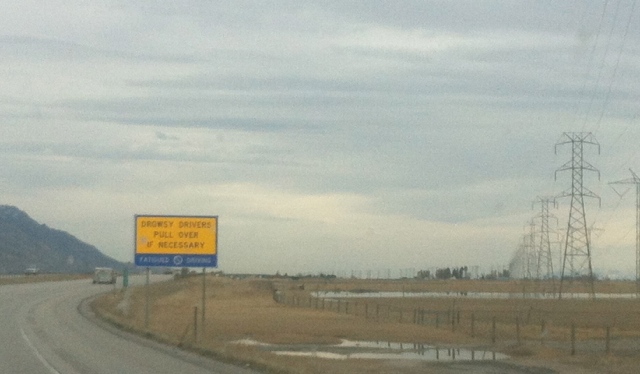 preferred Back of the Pack lodging – great rates

tired and dirty – ready for the next adventure