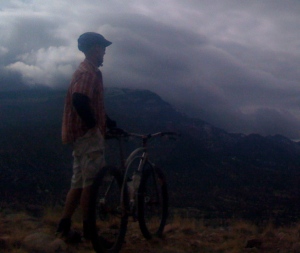 Tim, one of the most accomplished racers is the Back of the Pack Racing Team, suffered through an 18 hour race on August 14th, the link to the results are below. The race started at 4PM and ended at 10AM. Night riding, nice!. Tim was 17 out of 32 of all solo males – Tim’s was happy / surprised as stated in his own works – “since i felt like the only people i ever passed fell into one of four categories: chicks, fat dudes, people with a broken bike, and guys on unicycles (yes, there were two guys there who were even dumber than a rigid singlespeeder).”

1. don’t do it. drinking beer is easier
2. bring a fresh change of clothes for each lap, especially if you’re in the southeast where nothing will dry out. i have a serious case of diaper rash.
3. bring lots of batteries for a race which lasts all night. luckily, my light ran on aa batteries and i found someone to bum some from
4. racing in a wifebeater seems to carry some sort of bad karma. the last time i did it was at cedro a year ago, i bit it and got all scraped up. this year i rocked one for the last two laps and i decorated it crimson again. lots of blood from the elbow, but no serious damage. either karma or i was half asleep.
5. bring someone to drive you home. that was a brutal five hours
6. oh yeah, don’t try to fart after an 18 hour race. i didn’t confirm anything, i just bought some new shorts.

Next year? Doubt it since Tim will be back in the Land of Enchantment and moving forward to the 24 hour races. Killer.
18 Hours – Scouts Honor