Antarctica is COOL! Happy Camper School is COLD! At least this time of year.

But I’ll get back to reality later. I’m in a made rush to post some pictures before I head out to find the dudes that I’m here to support. Hopefully the dudes are arriving tonight.

Back of the Pack Racing in Antarctica

A Few Basics:
McMurdo Station in Antarctica is 19 hours AHEAD of New Mexico. So if it is 7PM on Wednesday in New Mexico or Colorado, then it is 2PM on THURSDAY at McMurdo. Cool, huh? But this isn’t anything new, New Zealand and McMurdo are in the same time zone.

And it is spring down here in the southern hemisphere. AND the sun will not set until ~ February, I think. That’s right. The sun is up for 24 hours a day and it goes around in circles! Am I crazy? No, think about it. And if you can’t figure it out I’ll give you a tutorial once I return to society.

Happy Camper School:
I’m down here in Antarctica supporting the New York Air National Guard. (Again, we are not searching for Aliens.) But I will be flying around the continent with the guys and gals. Therefore I’m required to take AND pass Happy Camper School. But I’ll change the name to Antarctica Survival Training – a short course.

This training was basically 32 hours of classic ‘jam it down your throat’ training. We did a lot, we learned a lot and we forgot a lot. But we all survived. It was fun, but it was intense.

The basics included classroom lessons, overview of basic camping equipment, setting up tents in cold, harsh weather, building snow walls, creating cooking pits, sleeping in the harsh environment, etc. It was basically camping 101 in the Antarctic. And because of the harsh conditions you can safely assume that one must know, and therefore learn, many survival technics… if survival is the goal.

Aside from surviving, my primary goal was to avoid a) wicked sunburn, b) frostbite, c) a combination of the two. And I achieved my goal. But I had to maintain focus. Because it ain’t easy operating in these conditions. (I love the word ain’t, but you already knew that.)

There were many challenges in this Antarctic Survival Class, but the weather was THE CHALLENGE. We experienced sunny skies with little or no wind. We experienced gale force winds. At times the blowing snow was low to the ground. Other times it was a complete whiteout. Visibility was down to 10 feet or less. Yes, we hit Condition 1 twice! I was told. And were routinely in Condition 2. Crazy stuff! The temperature WITHOUT windchill was around 0F at 1PM. I think the temperature dropped to around -15F to -20F. Then factor in the wind that was up to 60+ mph… the windchill was extreme. But we are all tough.

A coworker who is a veteran of two trips down Antarctica sent me this definition of Happy Camper School from the Antarctic Dictionary.

From the dictionary of Antarctic slang:
snow school
Also called “Happy Camper School”, it is wilderness survival training where students learn how to set up camp out on the open expanse of the Ross Ice Shelf, including making a snow wall to block wind, and erecting igloos and snow mounds for shelter. It is required for all winter-over personnel and, depending on the weather, lots of fun, or one of Dante’s nine Hells.
The Restrictions:

Severe weather is in progress. All personnel must remain in buildings or the nearest shelter.

Restricted pedestrian traffic only between buildings is allowed. Vehicular travel is only allowed in radio equipped, enclosed vehicles, and check out with the Firehouse, ext. 2555, is required.

Unrestricted travel and activity are allowed.

So. I won’t bore you with details. Because I’m beginning to think many readers of the blog are easily bored. (Or maybe I’m just a bit sensitive to Prob-eee’s complaints about being bored.) Check out the pics below. I’m sure the adventures will continue for the next couple of weeks. The original plans are for me to depart on Nov 12th. But that could always change.

So where am I?
the global view – Google Earth Style 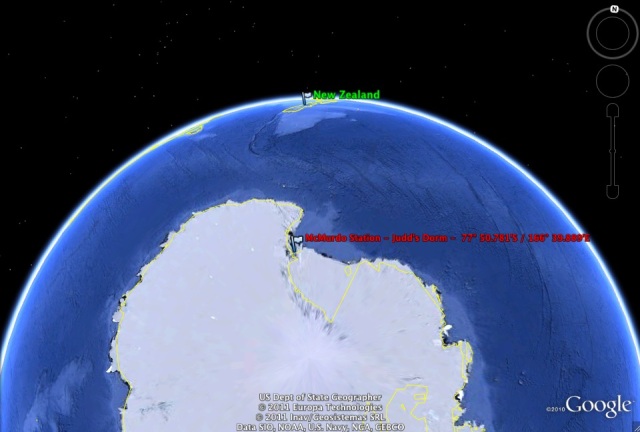 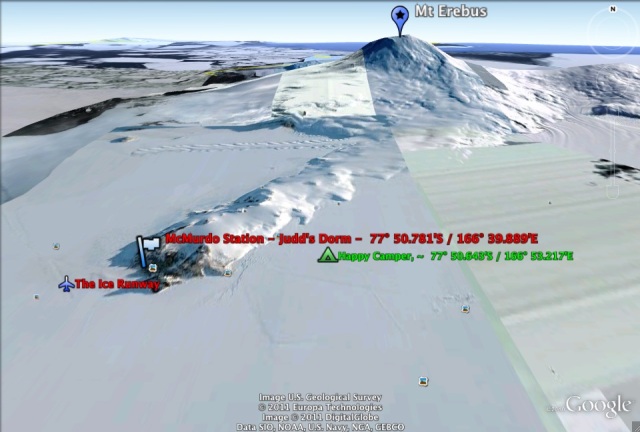 The Ice Runway and McMurdo:
arrival on the massive, but not too massive, C-17
yes, it’s an ice runway and it melts and it will be water + ice in a few months 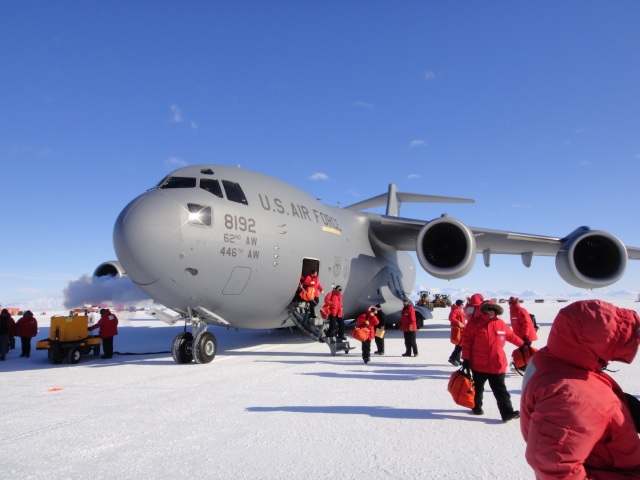 a view of McMurdo Station from the Ice Runway

our ride to McMurdo – Ivan the Terra Bus

a view of the C-17 on taxi for departure, from the McMurdo NSF lookout deck 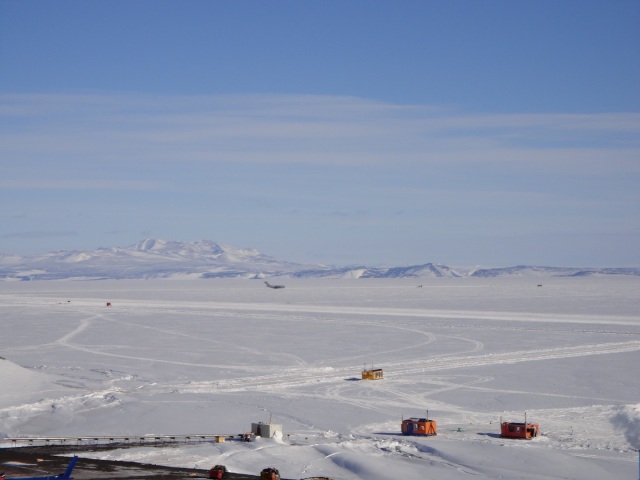 the chapel – are you praying for me? 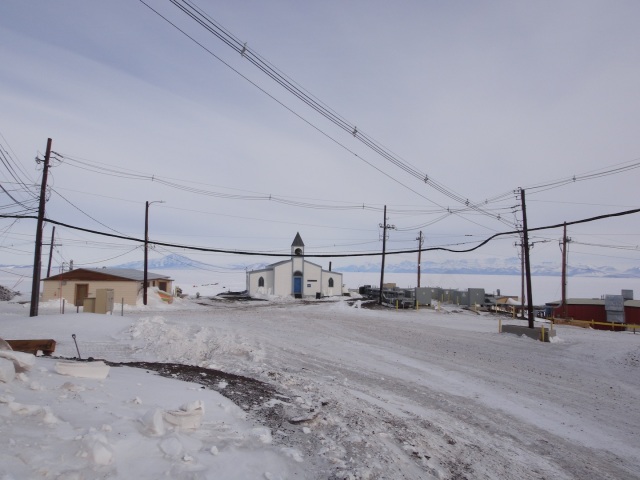 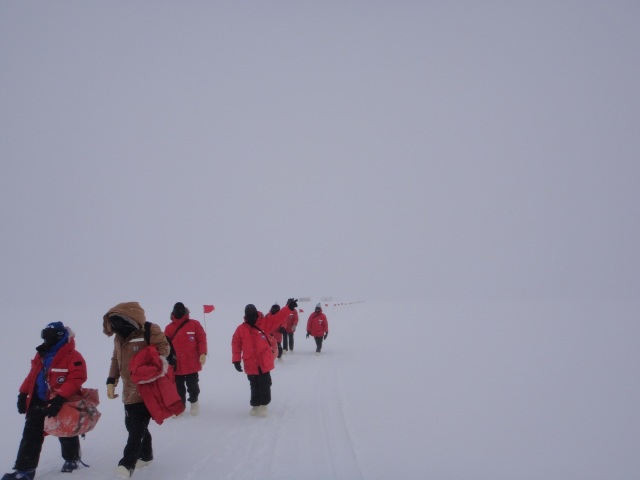 a view of Mt Erebus and The Judd 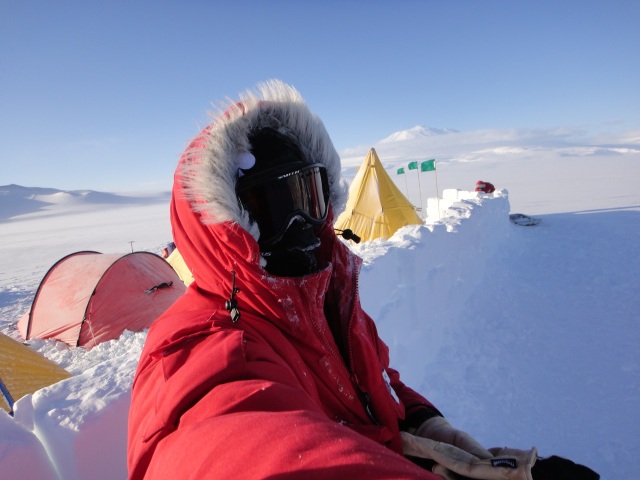 checking out the camp and Mt Erebus – from the supply container 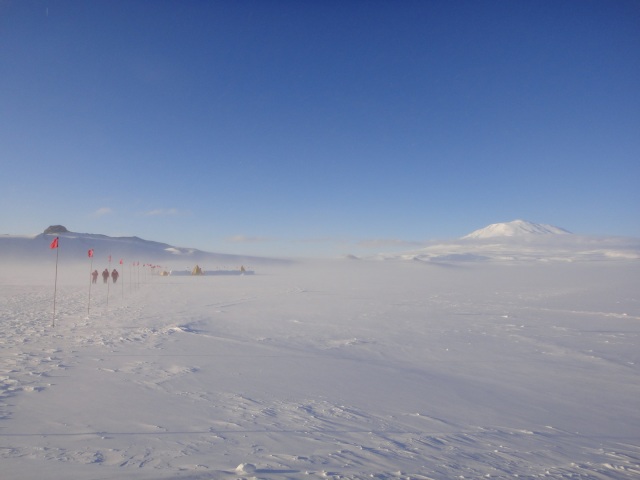 looking west back towards Scott Base, McMurdo is over the hill

one minute sunny, the next minute a whiteout

the delta, our ride to & from Happy Camper School

And the Weirdness:
uh, yeah. strange things go on down here in Antarctica.
can’t figure this one out 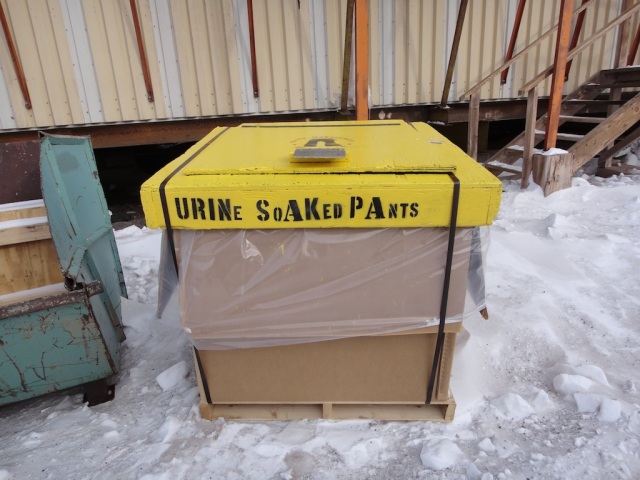 One thought on “Antarctica – The First Few Days”