SnowBikePacking in the Mount Taylor area. It wasn’t my idea – it was The Lt Col’s idea. So, after some resistance I gave in and decided the trip would be worth a few laughs… cuz The Lt Col was a rookie in the world of bikepacking and I couldn’t wait to see B.P.R’s Elder Statesman suffer like he’s never suffered before.

Anyway, the trip didn’t go as planned. Imagine that. But we had a great time and learned some lessons, as usual.

Lessons Learned – the reality of SnowBikePacking:

The Lt Col and The Morale Chairman are constantly talking about and thinking about thermal management. Meaning… how do you survive subzero temperatures if you are sweating your A$$ off. Well, I don’t worry too much about this. Because I figure it’s just gonna happen and the only solution is to keep moving. BUT if you must stop and you are dripping in sweat then you could be in trouble. So, maybe one of those two hot blooded gorillas will figure it out – so they can take a break, sit by the fire, write some poetry. I’m pretty sure I’ll just keeping moving and SMOKE their a$$es in the Arrowhead 135. Because, it is a race, you know. It’s a race for victory at The Front of the Back of the Pack.

And if you Wonder:

And if you wonder what The Lt Col reads at night… in terms of snowbikepacking research, check out this link – a link that defines The Lt Col’s primary set of worries.

The clock is ticking. In 4 weeks we’ll be grinding away on the trails in northern Minnesota. But before that I hope to organize two more snowbikepacking adventures. Gotta make it to the top of Mount Taylor and absolutely must experience some bitter cold riding in camping in central Colorado. Or reality may set in and we substitute the bitter central Colorado cold with some more bikepacking in mild central New Mexico. Yeah, the reality of reality sucks, at time.

AND Two Fundamental Things to Remember:

When you’re busy and can’t find time to digest all the Ludacracy that we promote at the Back of the Pack, just remember these two fundamental things:

The Standard Pics… just because:

is the sun really setting? 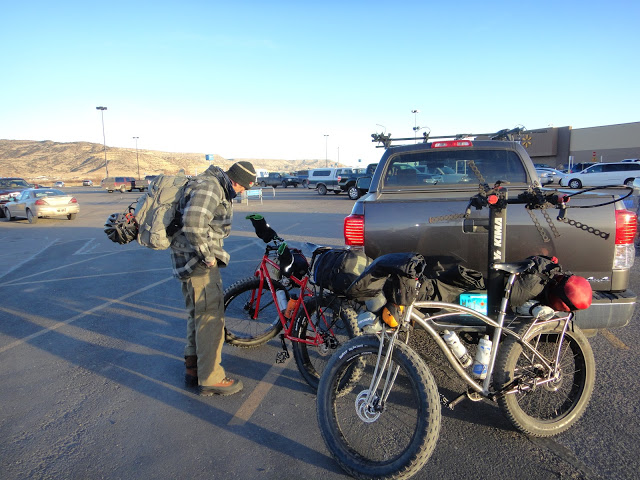 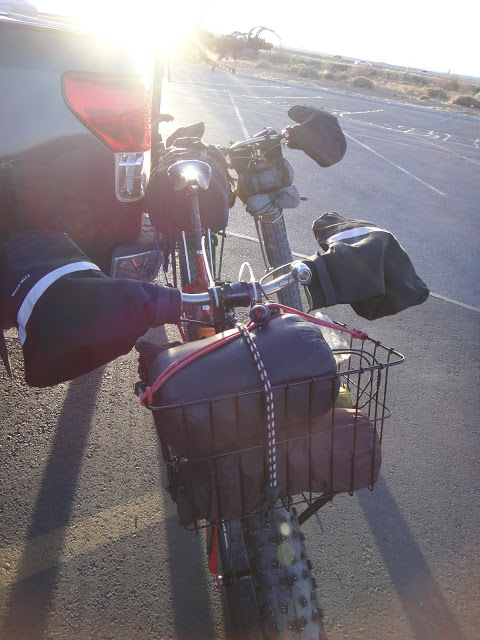 someone said Dec 29th was 1 day past the full moon
well, it’s still dark when you are in a dark forest. dude, dudette 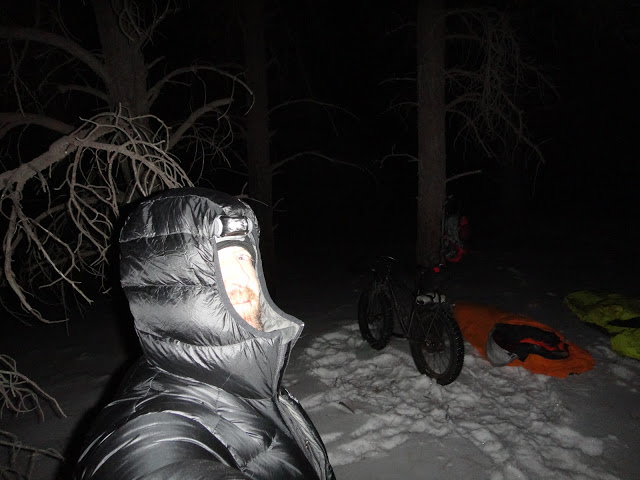 like I said… The Lt Col said his plan was to sleep in… til 10AM.
these married guys, always resting up when they get some time away from the family 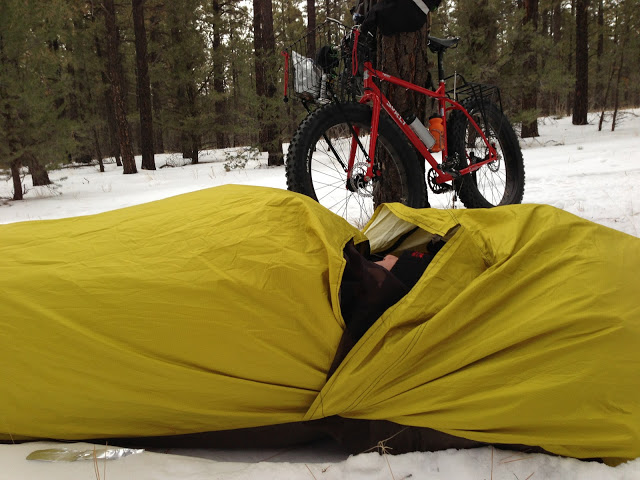 nutrition?
I eat macaroni in cheese in the AM
The Lt Col eats Jerk Chicken late at night

The Lt Col, playing with his basket, again

the Black Sheep SnowRoller… in the snow

The Lt Col
always messing with his gear

don’t worry, I’ll catch The Lt Col
he is rolling Nates and those dawgs are SLOW ROLLERs

headed downhill… not so fast 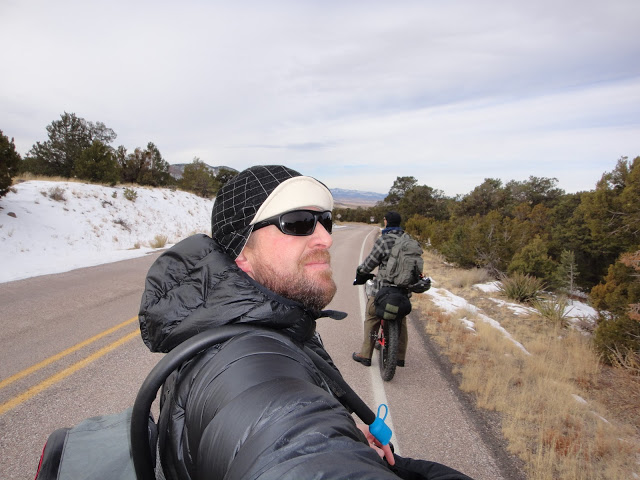 funny how The Lt Col decided the day before that…
cooking posole was more important that counting teeth on the rear cog
(and making a ‘ratio’ adjustment, as necessary)
yep, pain and suffering is part of the rookie experience…
just like pushing the bike is routine at the Back of the Pack 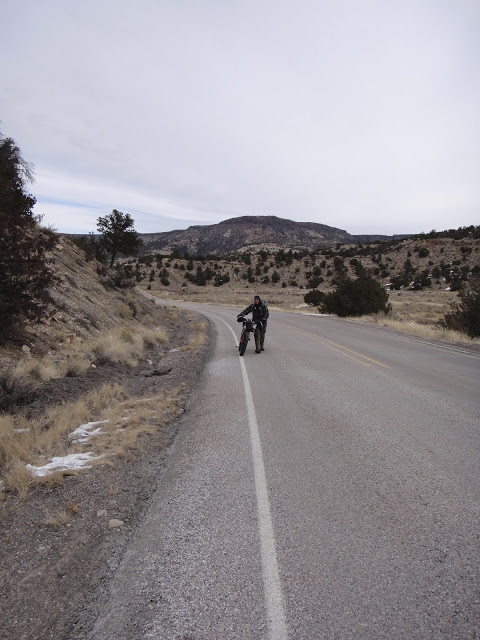 And now the Ludacracy:
people often wonder why us phat dudes burn 4000 calories…
on each ADVENTURE. BUT still get phat’r
cuz we eat stuff like this… all day long

The Lt Col is super freaked out about the plausible set of conditions:
-40F in Minnesota, the need to purge, the condition of…..
So, The Lt Col’s Foxy Mama found some ’emergency’ gear on the internet
yes, I still can’t believe I picked this damn thing up and took this picture… pukage 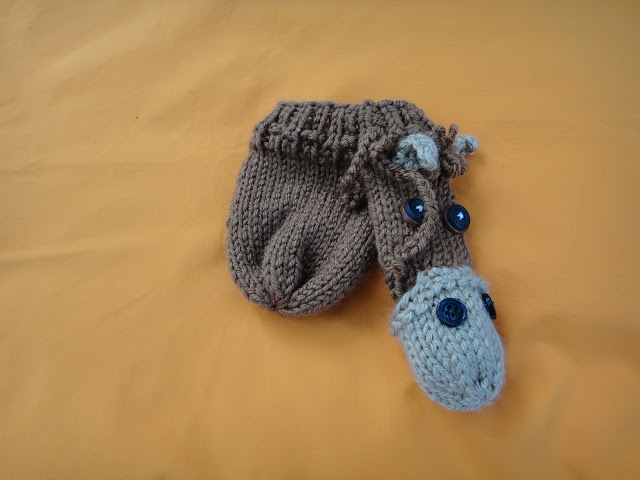