Skip to content
Holy Moses. It was cold today.
I woke up at 5:30 and decided to go to work. (It was my day off today, but I like to support the American way and be productive.) So, the car was loaded, I was full of caffeine and ready to roll. The outside temp was 2 deg! Crap. Well before I cranked the engine I decided to check one thing on the Internet – wanted to look at the Fifteen G Cranks, again. Well. I never made it to work. I stayed home, finished The Wrestler (what a movie, I almost got sick) and then watched the Victoria Secret Fashion Show. I watched the show for the…. opening performance of The Black Eyed Peas – of course. So, I hit the trails at 12:25PM. I couldn’t take the couch stuff anymore. My Hope Pro II SS hub was suffering from a broken pawl spring, but I decided to put some miles in with 3 out of 4 pawls. Not a big deal. Right? I don’t know.
Anyway, It had warmed to 22 deg by the time I mounted the Black Sheep. Awesome weather. Like the Back of the Pack team riding jackets? Bitchin’, huh? My upper body was warm. Feet and hands frooze – after the sweat soaked my socks and winter gloves. Yes, when your heart rate hangs out at 160 to 180 you sweat, even in frigid weather.
Well. I put in 20.5 miles, 3100 vertical feet. Not bad for the conditions.

So when I returned to The Crib I was happy to see that the replacement springs arrived. The dudes at Hope – USA are awesome. They sent me the replacement parts free of charge. Killer.
After a decent Crossfit workout I tackled the pawl spring replacement task. No problem for this dude. I’m not afraid of a wrench and grease. (Some other Back of the Pack racers are not so adventurous. I’m not naming names. But there is one dude that flies multi-million dollar planes – he runs away from the wrenches. That’s ok. Anyway, I’ll spend my cash on Black Sheep bikes & do the work myself. The local shops can do what they do to make cash, whatever that is, but they won’t get my cash.)
This is the pawl and busted spring removed from the freehub / pawl / spring assembly. 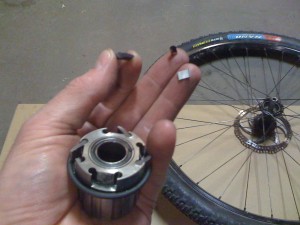 The pawl installation after the new spring was slipped in.

No problem, MOFO.
Below is me kickin’ it after the successful fix. What a nice Friday night out – out in the garage. Garage party anyone? Anyone? Anyone out there? Oh well. I’ll just head into the structure I call home, have a short conversation or two with the resident ghosts and then get horizontal on the couch. Need to rest up before the sub-Arctic ride tomorrow. 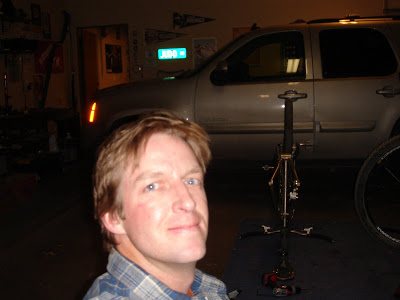 So, the Black Sheep is back in action with a Hope hub that actually has a full set of functioning pawls, again.
I thought it would be a good history lesson to add in a picture of my dad’s 1940 Schwinn World. (Of course I have all rights to the bike now.) The dude, Theodore Rohwer, acquired this bike when he was 8 years old. Yes! 8 years old. Look at the chainring on this beast. It weighs in at 42 lbs. My dad doesn’t understand my addiction to titanium Black Sheep. He doesn’t understand the desire to have a sub 20 lb single speed. Back in the day young Theodore rode this 42 lb beast all over Iowa. (His sister had/has one too!) Young Theodore was so small when he got this bike he would place the bike in a gutter and get on while standing on a curb.
Tough dude. They don’t make them like they did back in 30s and 40s. No, I am not talking about bikes. I am talking about the male species. Specifically American boys / men before and during WWII. We all wish we were as tough as the Americans back then. I think I will restore this beast. I bet my 77 year old dad will show up at one of the 24 hour races and ride the beast in the solo SS division.
Oh crap, just remembered. My dad is a fan of titanium. He has TWO titanium knees. Yep, they don’t make them like the did back in the day.

Well, I guess I should end this with a killer video from my second favorite band. KORN.

Check out this video. Damn!